How Does A Single Parent Of An Autistic Child Make A Living?

I have raised the subject of keeping a job while raising an autistic child, on my Facebook page. I have made sarcastic jokes about getting that phone call from the school nurse because my child was "very agitated" and "could you come pick him up?" I have shared the "resumé" that was written by my good friend at Autism In Our House. http://autisminourhouse.com/2015/06/29/my-fake-resume/ (<Hey, look!!! I learned how to insert the link...I think...) It included some of the little "emergencies" a potential employer might expect upon hiring a parent of an autistic child. I have played the possible scenarios in my head, over and over, and I really just want to know, HOW IS IT POSSIBLE?

There have to be parents out there who make it work. Otherwise, families with autistic children would be starving. But I really want to know what the answer is.

I imagine if a person is a skilled professional in a specific field, the possibilities would be greater. If a mom or dad were a longtime employee, going back before becoming a parent, there would be better odds of keeping that job, even with all the disruptions that will inevitably come. But I think there are a lot more parents out there who are in a position similar to my own.

When I got married, my husband told me, AND I QUOTE, "I will shovel shit, seven days a week if I have to, I want you home with our kids". I swear to you, those were his exact words. Luckily, for a good amount of time during the early years of our marriage, no shit shoveling was necessary. His business was doing well, and we were living comfortably. I was pregnant with our daughter when our son was diagnosed with autism, and being a stay at home mom enabled me to do all the running around that followed. Evaluations, therapies, school programs, doctor appointments, more evaluations, more therapies...I only gained 11 pounds during that pregnancy. There was a lot of running.

Those early years were busy. I spent several hours a day in the car. The school programs we chose were on the opposite side of our city, and because our boy was non verbal, and I was home, we chose NOT to send him to school on a school bus. Had I been working (at a paying job), we would not have been able to get him as much help as we did.

Fast forward to our move to the suburbs. The economy had crashed, business was no longer booming. We struggled quite a bit and the marriage suffered. Badly. I was accused of being lazy. I was told I was using autism as an excuse to stay home and do nothing.

It was an ugly period of our marriage. Really ugly.

So I took a part time job in a school lunchroom. And then my husband left.

So now, my soon to be ex is suggesting it is time for me to head back to the full time work force because his choice to exit the "til death do us part" has negated the whole "shoveling shit" promise.

I certainly don't enjoy the whole "living on the balls of my ass" existence. I wish the possibility of finding worthwhile employment was...a possibility. But here are some of the dilemmas I find myself facing:

1) I am a 52 year old woman with a GED and no college.
2) I haven't been a member of the full time work force for the last 20 years.
3) I have no currently marketable skills.
4) I have no family close by to help with my kids.
5) In addition to a non verbal autistic teenager with the mental capacity of a two year old, I also have a daughter in the throes of puberty. She is dealing with the emotional fallout of my broken marriage and exerting her intense need for independence. It's a really bad time for her to be left unsupervised.
6) Special needs child care is expensive.
7) Summer camp for my girl and ESY (Extended School Year) for my boy only go to the beginning of August. There are approximately four weeks at the end of the summer when my kids would be home.
8) Winter break.
9) Spring break.

Ok, with all that being said, I really need to know, where do I go from here?

Even if I'm able to find a job that pays a decent wage, the cost of commuting, maintenance of business attire and child care would pretty much eat up any salary I might earn with my minimal skills. It's like I would be leaving my children to be cared for by strangers, and there would be no money left. Not to mention, that non verbal boy...who do I trust? My daughter is responsible. I can run to the store and leave her with her brother. I can go to an after work meeting (for my lunchroom job) for an hour, once a month, and she is ok to keep him safe. But she's 12. My boy is usually even tempered and a pleasure to spend time with. But he is a 15 year old boy. He is becoming a man. He has OCD and is sometimes unable to control his obsessive compulsion. And my girl is tiny. So leaving her alone with him every day? Out of the question.

These suggestions by my ex, I'm relatively sure he is misinformed regarding the resources that are available. There are financial options that would help. SSI will probably be a possibility, once the divorce is final, and I have the necessary financial documents to present with an application. There is also help available in my state through Perform Care, (formerly known as the Department of Developmental Disabilities). But again, I need the documents regarding finances in order to submit any application. There are no babysitters. There are no discounts on special needs child care. There is also no after school program. I am pretty sure I know WHO is misinforming this ex of mine, who is all too happy to assume I just don't want to work. I imagine if I had a family member who owned a business that provided me with full time employment, and I was able to bring my kids to work with me, well, that would sure make the process a little simpler. It also might make me a bit smug, and feel like I might be in a position to presume everyone should be able to do everything I do.

But that's not the case for all of us, is it?

I don't go out. I don't visit friends. I sure as hell would never consider leaving my kids home alone so I could go out for drinks during the week. I rarely spend money on any kind of recreation. I'm not dating. My whole existence is about caring for my kids. Because I don't have any current options to EARN more money, I do everything I can to limit expenditures. But as this divorce moves closer to being final, I wonder what resources my husband has consulted in his mission to relieve himself of responsibility. He is currently taking care of his kids, and I do know he always will. But he appears to have decided that his choice to walk out on his wife and his promise somehow created magic possibilities for me.

When we first began having financial difficulties, darling hubby suggested I go back to work, and I would ask him back then, "What would you like me to do with our children?" He never had an answer. He still doesn't have an answer, but apparently, he is all too happy to point a finger at me, and leave the burden of making whatever arrangements will alleviate his own responsibility firmly on my shoulders. He doesn't care who his children are left with. As long as he can save a few bucks.

I don't know how this will all play out. We have a legal process to go through. But I sure would love to hear from anyone who has found a formula that works. I'd love to know if there is some magic solution I am overlooking. I'd love to know, where do I go from here? 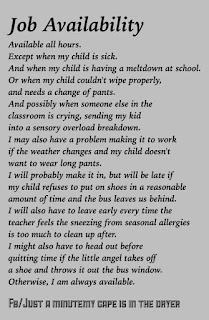